On request from customers, we perform additional processing on polished wafers, producing the following four kinds of wafers.

A polished wafer undergoes high-temperature annealing in an atmosphere of hydrogen or argon. As this process removes oxygen near the wafer surface, the resulting wafer has improved crystal perfection. 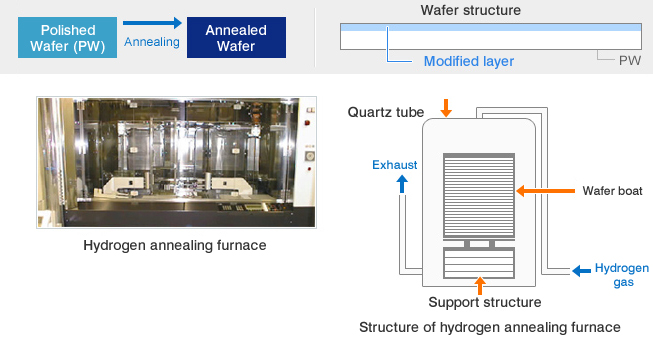 Polished wafers are heated to around 1200℃ in an epitaxial furnace. Vaporized silicon tetrachloride (SiCl4) and trichlorosilane (SiHCl3) are circulated in the furnace, causing vapor phase (epitaxial) growth of a monocrystalline silicon film on the wafer surface. An epitaxial wafer is a high-quality wafer for customers requiring an exceptionally perfect crystal structure or multiple layers having different resistivity.

Photolithography, ion implantation, and thermal diffusion techniques are used in accordance with customer design needs. After a layer for embedding integrated circuits is formed on the surface, another layer is formed on top of it by epitaxial growth.

An oxide layer is formed for one or both of the handle wafer and the active wafer on which semiconductor devices will be built. The two wafers are then bonded together by annealing. Next the active wafer is ground and polished to the desired thickness.

By forming an oxide layer with high electrical insulation inside the wafer, semiconductor devices with high integration, low power consumption, high speed, and high reliability can be realized. A diffusion layer of arsenic (As) or antimony (Sb) can be formed in the active layer as necessary.